Clement is Reds' hero with late winner at Banbury

JORDAN CLEMENT bagged his second goal in as many league matches to lead Redditch United and new boss Matt Clarke to their first win of the Southern Premier Central campaign on Saturday.

Clement’s 83rd-minute strike took the Reds on to four points from two games and was the perfect response to the frustrating midweek FA Cup exit at Hanley Town.

Spurred on by a good crowd including a healthy following of Redditch supporters, the visitors were made to work hard in the early exchanges as Banbury enjoyed plenty of the ball and some early corner kicks but they failed to threaten the Redditch goal. 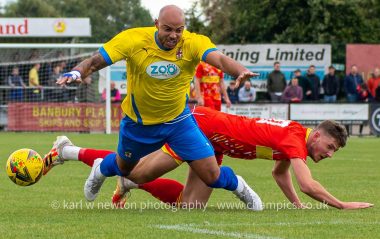 Redditch’s Matt Dodd in the thick of the action at Banbury United. Picture by Karl W Newton Photography.

The first real chance came from a free kick in the 13th minute following a foul on Redditch winger Matt Dodd.

Left-back Brandon Horton, who scored in midweek with a free kick, fired a superb left-footed shot towards the top-right corner but the ball cannoned off the crossbar, resulting in a goal kick.

The general consensus around the ground was that it was in fact a brilliant save by Banbury goalkeeper Jack Harding but, regardless, the hosts were able to breathe a sigh of relief.

Visiting midfielders Tom Rankin and Kieran Day were industrious throughout in the engine room and their hard work created space for the tricky Dodd to force a number of corners towards the end of the first half, but the interval arrived with the match goalless.

Banbury began the second half on the front foot but, despite calling Kieran Boucher into some action, never truly looked likely to breach a strong Redditch rearguard.

Clarke made a double substitution as Alex Cameron and Hedilbetto Santos were introduced on the hour mark before a third change saw Kyle Copp handed a debut in the 69th minute.

Clearcut openings remained at a premium at both ends but, just as a stalemate beckoned, excellent play from Santos released Horton who was able to pick out 22-year-old Clement who fired a shot into the bottom right-hand corner to send the Redditch fans into raptures.

Clarke and his troops will now aim to build on this success in another tough encounter at Coalville Town tomorrow (Tuesday).

Report compiled with the help of rufcofficial.co.uk.