A LATE double from former Redditch United forward Jason Cowley helped settle a fiery affair as the Reds were beaten 3-1 at Bromsgrove Sporting in their Red Recruitment Trophy opener on Tuesday night.

Three days after Alvechurch had thrashed Worcester Raiders 5-0 on the opening day of the festive tournament – acting as a one-off for the four clubs involved while the wait for a return to competitive action goes on – Sporting struck twice in the dying embers to maintain bragging rights over their local rivals.

While the meeting can essentially only be deemed as a friendly, the match had every bit the intensity expected of a rivalry – even overstepping the mark considering the red cards displayed to the hosts’ Tom Taylor and the Reds’ Doncaster Rovers loanee Branden Horton.

It was the hosts who opened the scoring at the Victoria Ground on 13 minutes when another former Red Josh Quaynor flashed a left-footed shot beyond Kieran Boucher from Miro Pais’ cross.

The action-packed encounter then saw Taylor dismissed with a straight red after an off-the-ball altercation with returning Redditch striker Dan Sweeney, who earned a penalty in the process before duly stroking home an equaliser on 36 minutes. 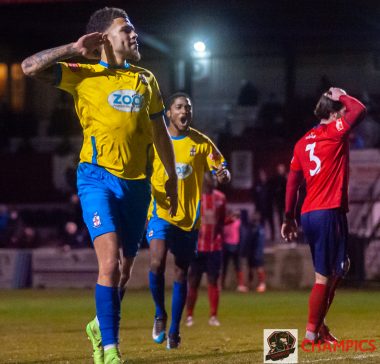 While Redditch enjoyed more clearcut chances with the man advantage – Max Beardmore denying his old side with saves from Tom Hillman and Sweeney – they were unable to capitalise prior to Horton’s dismissal 14 minutes from time.

Buoyed by the levelling of the playing numbers, Brendan Kelly’s side hit the front with just two minutes to play when Quaynor turned provider for Cowley to find the corner and win the day for Bromsgrove.

Cowley’s night got even better still when he netted his second and Sporting’s third in the third minute of stoppage time after blocking Boucher’s clearance and finishing after the ball ricocheted against the crossbar.

However, there was disappointment on Wednesday evening when it was announced Worcester Raiders had withdrawn from the trophy due to their West Midlands Regional League commitments resuming this weekend.

The last-minute decision to resume competitive football at that level means Raiders can no longer fulfil their remaining five fixtures in the one-off event.

Reds chairman David Faulkner said: “Redditch, Bromsgrove and Alvechurch are committed to completing the remaining fixtures and we are now seeking a new opponent to host on Boxing Day so we can still host festive football for our magnificent supporters.

“Anybody who has purchased tickets for the Boxing Day game will have these transferred if we can secure a new opponent. If you would like a refund, please email info@rufcofficial.co.uk. Refunds take three to five days to complete.”

Tickets are still available for the Reds’ next game at home to Alvechurch on Monday, December 21 (7.30pm).

Bromsgrove now go to Lye Meadow on Saturday, December 19 to take on Alvechurch in a battle between the current leaders of the trophy.

DAN Sweeney was back in action for the Reds having returned following a short spell with Southern Premier Central rivals Hednesford Town.

The former Kidderminster Harriers, Solihull Moors and Leamington forward signed for United in July 2020 and was injured in pre-season before switching to the Pitmen in September.

ALVECHURCH’S thumping win at Raiders in the trophy’s opening fixture on Saturday came thanks to a superb hat-trick from Tyrell Hamilton and goals from Sam Mclintock and Joe Hull.