REDDITCH Ladies enjoyed a weekend to savour as they secured two victories in Worcestershire League Division One.

Off the back of a thumping 7-0 home win over Harborne 4ths on Saturday, the Kingfishers went into Sunday’s rearranged home game against Bournville with confidence, if not a little fatigued, and the need to draw on players from the second team to bolster the ranks.

The game started well and Redditch always looked strong, but Bournville showed their resilience and breaking through the lines of the visiting midfield and defence became more and more difficult.

However, with a second short corner within a few minutes and a well-worked move between sisters Jo Cook and Anna Dawson, the former was able to guide the ball in between the keeper and defender on the line to open the scoring.

With Redditch a goal up, the pressure was firmly on the away team, but the Kingfishers could not add to their advantage before half-time.

Bournville regrouped at the break and in the opening minutes of the second half they were able to create a few opportunities, which required keeper Mel Vaughan to pull off a superb double save. 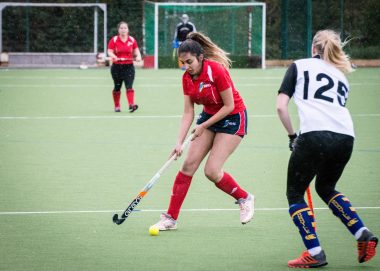 Redditch’s Aleena Hussain comes up from defence to put more pressure on the Bournville defence in the last few minutes. Picture by Lee Williams.

The Redditch defence was holding strong and, with Claire Humphries’ calmness on the ball, she was often able to switch the play from defence to attack.

It was during one of these transitions that Cook was able to net her second goal of the game after a quick pass and move through midfield to the forwards.

The ball was pushed wide right and back into the shooting circle for Cook to fire home past the outstretched Bournville keeper.