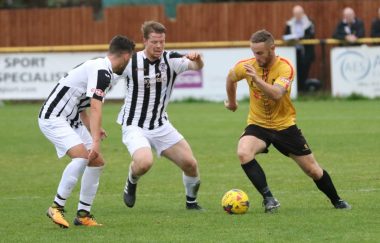 HISTORY is set to repeat itself 50 years on this summer, as Alvechurch meet Oxford City in a pre-season friendly to commemorate their record-breaking FA Cup clash.

The two sides etched their names in folklore in November 1971 after facing off in the longest-ever FA Cup meeting, taking place over the course of six matches. With no replays now taking place, it’s a record that will not be broken.

Church were the victors in the prolonged fourth-qualifying round tie, finally progressing after 11 hours of football – completed in the space of 16 days – thanks to Bobby Hope’s deciding goal in a slender 1-0 win at Villa Park.

The promise of a first-round trip to Fourth Division Aldershot was not the only reward for Alvechurch come the final whistle, as the late Doug Ellis, then chairman of Aston Villa, presented champagne to both teams to celebrate the feat.

Then a Midland Combination Division One side, Church fell at the next hurdle in front of 4,638 fans at the Shots’ Recreation Ground, where they succumbed to a 4-2 defeat, but did go on to win the 1971/72 league title that season.

Ian Long’s men, now in the Southern League Premier Central, will hope for a similar effect after the Church and the Hoops, now a National League South side, go toe-to-toe on Saturday, July 17 to honour the historic tie at Lye Meadow – although after only 90 minutes of football this time around.

Elsewhere, the club have confirmed departures on and off the field.

Central midfielder Mitch Botfield has left for pastures new, after two separate spells at the club.

The 27-year-old initially made acquaintances with the Worcestershire side at the beginning of the 2017/18 season, making enough of an impression to earn himself a move to Stourbridge in the summer of 2019.

After a short stint at the War Memorial Ground, Botfield returned to Lye Meadow in October that year.