FORMER boss and current director Dean Holtham ‘is exactly what we need now’ to fill in as Alvechurch interim manager, according to chairman Richard Thorndike.

Holtham, who is a Church board member and education programme director, takes charge of the team for Saturday’s trip to high-flying Banbury United after Darren Byfield was axed.

Alvechurch had a potential replacement in mind but the target is not keen at this moment so Holtham will step in until a permanent appointment is made. Simon Redhead will be the No 2.

Thorndike is aware of the need to act quickly after revealing other clubs have been sniffing around the Lye Meadow squad but he has complete faith in Holtham, who saved the club from relegation in the Midland Alliance in 2012 and won the Worcestershire Senior Urn.

“Dean is both a board member and a friend with the club at heart,” said Thorndike.

“Every decision he makes is for the benefit of the football club and not for him personally. With what he has already achieved in the game both at professional level, academy level and non-League, he has no desire to enhance his CV or look to move on.

“Given what he did for us in the 2011/12 season, winning the Worcestershire Urn and saving us from certain relegation, along with his vast experience, Dean will steady the ship while we look for a permanent appointment. He is exactly what we need right now.”

Thorndike added: “I had someone in mind for the job but when I put the feelers out there, the feedback I got was that he felt the timing was wrong so I respect that decision and haven’t pursued that option any further.

“I will sit down with the board after Saturday’s game to plan next steps because the vultures are already circling, looking to entice some of our players away so it’s important I make the permanent appointment soon.” 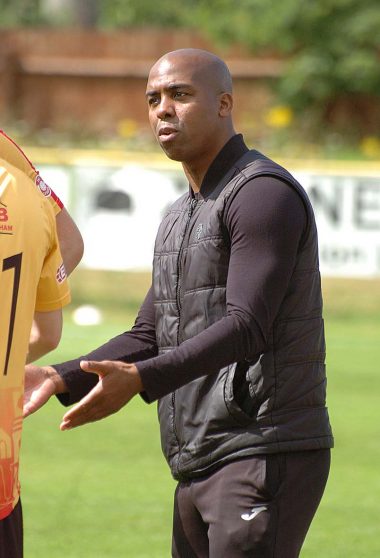 The club announced the decision to part ways with Byfield with an online statement.

“It is with sadness that we announce the departure of Darren Byfield as first team manager.

“The recent run of results have seen us bow out of all cup competitions at the first hurdle and left us just outside the relegation zone.

“It was always going to be a task of mammoth proportions assembling a new squad following the departure of most of the team from last season. We’ve picked up points here and there and, although there are green shoots of recovery, the board felt it was time to move in a different direction.

“We would like to thank Darren for his efforts this season and wish him well for the future.”

On Saturday, Alvechurch had struck first and then watched Diamonds miss from the penalty spot but it was not to be their day.

Linden Dovey crossed for new recruit Kieran Miller to head home on his debut to give Church the lead after seven minutes.

At the other end, Kyle Perry wasted an inviting chance when he fired over after Jordan Goddard’s free kick had been spilled by keeper Ben Heath.

However, Rushden continued to create the better openings as Sargeant saved from Jordan MacLeod before they finally levelled through Shariff on 78 minutes. Jesse Akubuine’s cross was deflected on to the bar but former Stratford Town forward Shariff was perfectly placed to smash home the rebound.