IAN KING expects to recruit a couple of experienced additions to pass on their know-how to his young Redditch United squad in time for Saturday’s trip to Biggleswade Town.

The manager knows the revamped Reds are very much a work in progress and patience will very much be a virtue as they adjust to playing in the BetVictor Southern Premier Central.

But he hopes to add players used to this level and above to follow the recent capture of former Kidderminster Harriers midfielder Liam Truslove from Hednesford Town to get the best out of his players.

“There’s a good chance we will be able to bring in a coyuple of players with League and Step One and Step Two experience in non-League in the next couple of weeks,” said King told the Standard.

“The key for us is to blend some experience, players who have played at this level or above, to help out the younger players.

“We’ve got a good, young group. They do listen, they take on board instructions we give them and they are learning. But we are slightly naive at times. To progress, we need players who are used to this level, players who can guide us through when we are under pressure for ten or 15 minutes.”

Last Saturday was a case in point when King felt the Reds played their best football of the season so far, only to fall to a 1-0 defeat at home to St Ives Town. 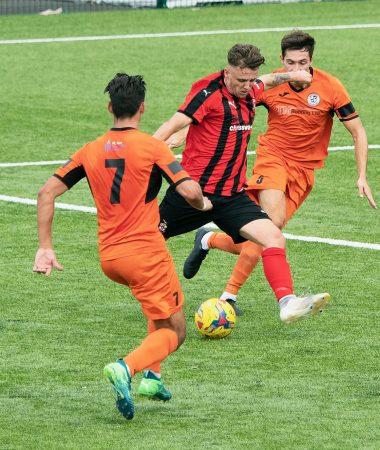 But they showed their resilience in midweek when, despite conceding an early goal to Alvechurch, they progressed in the Southern League Challenge Cup with a 2-1 victory at the Trico Stadium, thanks to goals from Louis Monaghan and Jak Hickman.

Kyle Perry gave the Church the lead but Monaghan headed home an equaliser and Hickman thumped a 20-yard free-kick winner.

“Alvechurch were probably the better team in the first half,” said King. “We changed our formation at half-time and ha d areal go and we got the two goals.

“On Saturday, it was frustrating because that was probably the best football we have played all season. We created numerous chances but couldn’t convert them. Losing the game was difficult to swalllow.

“We are a work in progress, we’re a young team. We need to be patient, and I’ve got to be patient too. You have to remember that some of these young players are in their first season of playing non-League football. It’s very different to playing in the pro under-23 leagues or in pro academy football.

“They are certainly getting better but everybody has to be respectful of the fact that it will take time.”

The Reds’ win against Alvechurch was their first in five matches and will leave them in good heart for the trip to tenth-placed Biggleswade on Saturday before they welcome West Bromwich Albion to the Trico on Tuesday for a Birmingham Senior Cup first round tie.

Albion are likely to field their Under-23s, with some of their stars of the future set to line up.

“Biggleswade are an experienced side at this level and they’ve picked up a few points,” added King. “I am sure they will look to put us under pressure at certain times and it’s important we show we have learned how to stay in games.

“Then we can look forward to playing West Brom. It will be nice for our players to test themselves against full-time players.”

Start your year by training like a marathon runner during lockdown