IAN LONG saluted Alvechurch’s teenage prospects for proving they can match one of the title candidates – and told his players their midweek point at Tamworth has set high standards for the rest of the season.

Church followed an opening day goalless draw with Royston Town at Lye Meadow in their first match at Step Three in 40 years with a 1-1 draw at Evo-Stik South Premier Central promotion favourites Tamworth on Tuesday.

Long included three teenagers in the XI – with goalscorer Kieron Cook and Theo Llewellyn making their first starts alongside Luke Yates – with two more as substitutes. Jordan Piggott, 19, has now received his international clearance having played last season in Scotland and joined 18-year-old Taylor Morrison on the bench.

“Cooky, Theo and Yatesy are all 18 and they have never probably playing in front of the biggest crowd they’ve ever faced,” said Long. “There were 600 fans, playing one of the favourites for the title and Tamworth fans can be hostile so great credit to the players. They didn’t let themselves down and they will only get better.

“Josh March led the line and was superb and at the back Jamie Willets has been brilliant in the two games alongside Andy Parsons. They dealt with the high balls into our box and at the other end we did create chances but probably just lacked the final ball. It’s about decision-making and having that little bit of composure to turn chances into goals.

“It gives us great confidence that we can go to one of the favourites and get a result.” 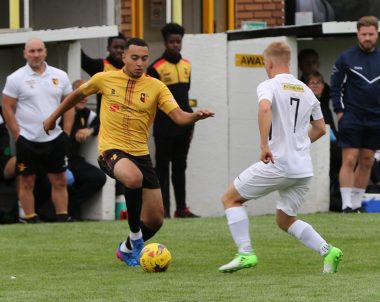 Alvechurch will look to continue the learning process when they travel to Coalville Town on Saturday, with Long hoping Ryan Winwood and Paul Evans will be pushing for their first appearances of the season.

Midfielder Winwood, hurt in pre-season, and goalkeeper Evans, who has been unavailable, both featured for Wolverhampton Casuals on Wednesday to get match fitness.

Long is also eyeing a move for Racing Club Warwick hot-shot Trea Bertie, having made a seven-day approach for the former Smithswood Firs forward who netted twice in the Racers’ FA Cup slaying of higher league Coleshill last weekend.

However, midfielder Dave Bellis is unavailable and striker Aaron Lloyd and keeper Charlie Price are touch and go. Lloyd tweaked his knee ligaments against Royston while Price hurt his ankle after falling down the stairs after tripping over his dog.

The absence of Price and Evans meant Matt Sargeant wore the No 1 shirt against Tamworth and he responded with a penalty save.

The Lambs stunned the Church with a goal inside 30 seconds from Kyle Finn but Cook levelled on 22 minutes. The hosts then had the chance for a winner on 77 minutes when Joel Kettle was fouled but Tyrell Waite’s penalty was saved as Sargeant dived to his left.