Long road ahead to new season, but Reds skipper Rankin is confident for the future 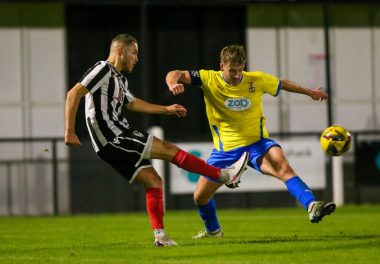 Skipper Tom Rankin, right, is hopeful that the club can continue to build in the 2021/22 season. Picture: Chris Simpson.

REDS skipper Tom Rankin feels that a return to the pitch will help restore and build on the feel-good factor at the Trico Stadium, as the long road towards pre-season and the 2021/22 season begins.

Matt Clarke’s side have just under five months remaining until the new Southern League Premier Central campaign gets underway, leaving both Redditch United and rival clubs to deliberate on the best route going forward in the hope of hitting the ground running after the extended break in play.

For Rankin, who became club captain shortly after his arrival from Bromsgrove Sporting in November 2019, there could be real value in a friendly competition between local clubs in the build-up to the main phase of pre-season, but warns that the Reds must get the balance right.

“I think just to get back down [to the Trico Stadium] and do a bit of training initially is going to be really good on many levels – mentally and physically,” said the 25-year-old.

“For the players coming back, they’ll want to be playing a few games.

“But with pre-season in mind, if you’ve got a massive tournament coming up now with a load of games and then a full pre-season, you might be shattered before the season even starts.

“But I think it’s definitely something that can be organised, the lads would enjoy that and the training for it, it’ll just be brilliant to get back.”

Rankin is one of a select group of players who has well and truly been through a rollercoaster of emotions since making the move to the Trico Stadium, taking in the trials and tribulations of the tumultuous 2019/20 campaign, before reaping the fruits of his labour in the short-lived but uplifting 2020/21 season for United.

And with things now on the up for the club once again, he believes there has been a real foundation laid for Redditch to push on next term.

“I think one big thing I’ve seen the club do is position itself in lots of different ways,” Rankin continued.

“The marketing side of it, the buzz around the club’s social media.

“You just see it within the lads, the season tickets that were sold, the fans coming down, the Biggleswade and Rushall games that we were selling out.

“I think since the new management and the new players came in, we’ve really clicked as a group, we’re all good mates, close knit and I think that’s shown that in the performances.

“Hopefully the fans have enjoyed what they’ve seen so far and they’ll come back next season.”