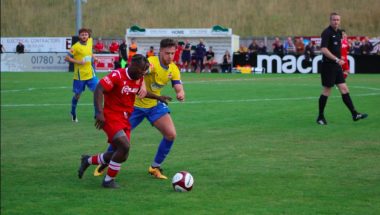 A RALLYING cry has been issued by Redditch United midfielder Kieran Day, in the wake of last weekend’s first qualifying round exit to Stamford AFC in the FA Cup.

The Reds’ dismal record in the qualifying rounds of the competition in recent years continued last time out, as Cosmos Matwasa and Ed Cook scored in either half to give the Daniels a 2-0 victory and send the Reds crashing out at the first hurdle.

With no midweek fixture against Merthyr Town due to the Martyrs’s replay with Hamworthy United, United will now go in search of a response against Biggleswade Town at the Trico Stadium on Saturday – with Day intent on stopping the rot at the first opportunity.

“We need everyone to turn up now and show the fans what we’re made of, we need to stop up and get some results because it’s not been good enough – everyone can see that,” said the 27-year-old.

“I thought we dominated the ball, particularly in the first half, we gave away another silly goal which seems to keep happening.

“But we have dominated without creating too much going forward, there’s something missing which I can’t put my finger on at the moment.

“In the second half we came out looking sharp and played well in the opening 15 minutes.

“I’ve given away a silly free kick, and as we’ve seen this season we can’t defend set pieces, which is when we give away the second goal.

“In the last 20 minutes we were all over the place, the gaffer had to make a couple of changes so it was disappointing.

“We enjoyed a lot of the ball compared to previous games, so we’ve got to be better in possession and with our decision making, but I really do hope we can play more of that style.”

It took 13 minutes for the hosts to hit the front at the Zeeco Stadium, when Matwasa fizzed a shot past the helpless Kieran Boucher.

Tiago Nassunculo made himself a constant threat for Redditch and made a key opening for himself before being denied by Dan Wallis.

With the Northern Premier League Division One Midlands hosts continuing to threaten themselves, it was no surprise when Cook dispatched at the far post from a right-flank delivery.

Redditch’s upcoming opponents Biggleswade were also dumped out of the cup at the weekend, going down to Hitchin Town 3-0 to continue a mixed start to the season for Chris Nunn’s Waders. 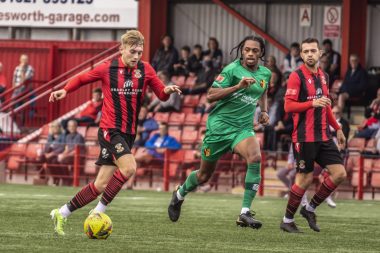 JAMIE Ashmore and Josh Ezewele netted the goals to seal Alvechurch’s progression in the Southern League Cup against Barwell.

The duo netted in the first half to make it a fairly straightforward evening for Ian Long’s men at Nuneaton Borough’s Liberty Way home, helping atone for their 3-1 humbling by Tamworth in the FA Cup two days earlier.

Tyrell Waite, Dan Creaney and Orrin Pendley rendered Luke Yates’ reply meaningless at the Lamb Ground, with a missed penalty by Anthony Dwyer at 1-0 down and further spurned chances proving costly for the Church.

A trip to Royston Town follows on Saturday as league action resumes, before a fourth away day in succession against Coalville Town on Tuesday night.