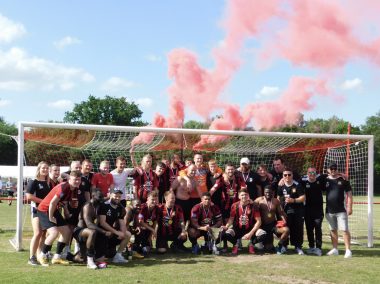 Alcester celebrated their victory in style after the full-time whistle in Solihull. Picture by Pete Ray.

FIRST-HALF strikes from Karl Walker and Ross Dempster ensured Alcester Town ended the season in style last weekend with a 2-0 win over Coventrians to secure the Post-Covid Lockdown Charity Cup.

The Midland League Division Two club were firm favourites to lift the trophy against their Division Three counterparts, following a scintillating group-stage campaign and a great show of composure to oust AFC Coventry Rangers on penalties en route to the final, and did anything but disappoint with their display in the showpiece game at Hampton’s Field Lane home.

And with news that the management team of Matt Seeley and Craig Gasiewski are set to remain in charge of the Romans, it is silverware which could well inspire Town on to greater things next term.

It took just a matter of minutes for Alcester to find the opener, as Walker beat Coventrians’ ‘keeper Ricky Blewitt to the ball with a looping header that nestled in the back of the net.

With a number of shots on goal for Town’s Josh Benton to deal with, it was not entirely plain sailing for the Romans. 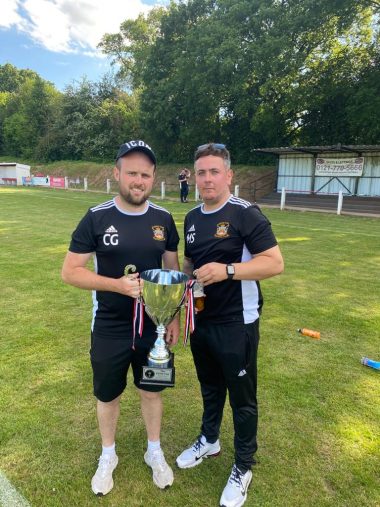 From left: the management duo of Craig Gasiewski and Matt Seeley will continue their good work with the Romans next term.

Luke Wilson twice threatened from free-kicks in the aftermath of the breakthrough goal, but was denied by the impenetrable Alcester shot-stopper.

Dempster directed a chipped effort straight into the gloves of Blewitt from a good position, but the Town forward made amends with a simple header to double his side’s advantage after a goalkeeping error.

Holding a 2-0 lead going into the break, it was clear who had it all to do in the second half to avoid heartache at the full-time whistle.

Fortunately for Alcester, the lack of threat from Coventrians meant it was a fairly straightforward half to see out, ensuring captain Drew Ricketts and Co. were able to hold the Cup firmly aloft come the final whistle.