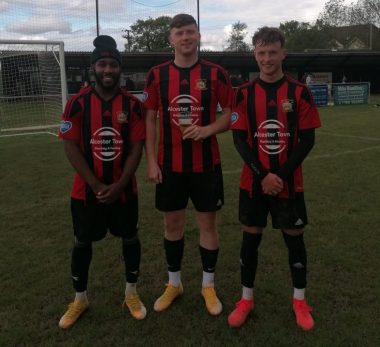 LEADERS Alcester Town will look to sign off the group stage of the Post-Covid Lockdown Charity Cup in style this Saturday when they visit Coventry Alvis before the semi-finals of the competition get under way.

The Romans know that another win against their Warwickshire rivals this weekend would essentially seal their status as group winners – given their better goal difference of six over second-place Knowle – before a last-four showdown with either Coventrians or AFC Coventry Rangers.

It was a scoreline which did not do Town justice, though their response after the interval to regain the lead and then finish off the job was highly commendable.

A quickfire brace put Alcester firmly in the ascendancy, as Scott fed the ball to Deards to bury his second from close range, before picking up a second assist moments later when playing through King to round Coventry ‘keeper Sean Wilson and finish.

Capping a strong display, Scott then etched his name onto the scoresheet with a powerful drive into the bottom corner of the net following a Sam Fitzgerald centre.

The scoreline could have made even better reading for Town, had Fitzgerald got the better of Wilson from 12 yards after a penalty was awarded for a foul on King.