Star-studded line-up as United do battle with Midlands Legends

THE STARS are set to align at the Trico Stadium on Saturday, when a Midlands Legends XI take on a Redditch United Legends side to raise funds for the Libby Mae’s Little Angels charity.

With a lack of live footballing action on show due to the current downtime before the 2021/22 campaign gets underway, the match will serve to put on a show for the town while raising vital funds for neonatal units across the Midlands.

An impressive line-up of Midlands talent has been assembled by former Aston Villa manager Brian Little, who oversaw the club’s fortunes between 1994 and 1998 and secured the Villans’ last silverware in 1996, for the fixture.

Former Birmingham City players Clinton Morrison, Martin O’Connor, Lloyd Dyer and Graham Hyde are all set to star, while Mark Bellingham – a non-League goalscoring dynamo in his own right and father of England international and Borussia Dortmund sensation Jude – is the other name with a Blues connection. 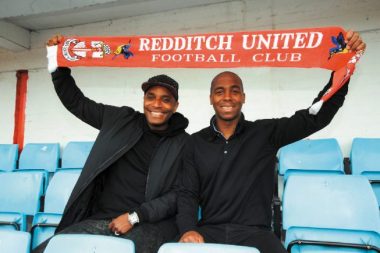 From left: The Reds connection, Clinton Morrison and Darren Byfield – pictured here in 2016 – have previously turned out for United and will star again on Saturday.

Ex-Reds boss and player Darren Byfield, who has represented a number of Midlands sides including Aston Villa, Walsall and Solihull Moors, will be joined by another Villan in Lee Hendrie – a one-time England international – while current United assistant manager Richard Sneekes and Daryl Burgess represent the West Bromwich Albion contingent in the squad.

For Redditch, a string of former favourites from Exodus Geohaghon, Liam McDonald, Scott Rickards, Carl Heggs and Howard Forrington, to a current squad member in Asa Charlton, will be representing the home side’s hopes – managed by popular manager Gary Whild.

With tickets ranging from £5 for adults, £3 for over 65’s and concessions, £3 for under-18s and students, and under-13s entering free of charge for the 3pm kick-off, the spectacle on show looks set to be an enthralling one for all in attendance.

Tickets for the fixture can be purchased by clicking here.