RISING boxing star Madison Adkins is dreaming of earning Olympic selection after continuing her promising start to the sport.

The 13-year-old, who represents Redditch club Bodyshot Boxing, claimed a hugely impressive victory in the Three Nations Championship at Barnsley Metrodome on the back of a reaching the final of the English Schoolgirls Nationals.

Adkins, a pupil at Studley High School, started boxing 20 months ago and at the end of January started competing. She has shown immediate core skills and has made a big impression under the stewardship of coach Carl Walton. 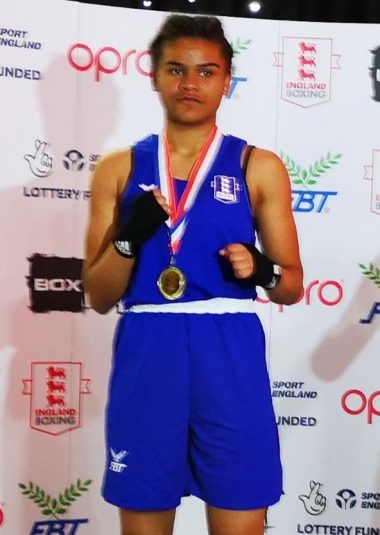 Madison Adkins with her medal after winning in the Three Nations Championship.

She has won four bouts out of five to achieve her Three Nations success, which culminated in a victory in the final against a fighter from Southampton.

In the first round of the final at the two-day competition, Adkins was up against an opponent 3kg heavier and 4in taller, but she was unfazed and appeared to edge a cagey round thanks to some impressive counter-punching as she showed good mobility and speed.

Adkins, who stands 5ft 6in and weighs 64kg, was on the front foot in the second round, which left the southern boxer with it all to do in the third and final round. The Southampton boxer went on the attack but she was on the end of some excellent combination punches and the judges declared Adkins the winner by a split decision.

Adkins, no stranger to sporting success having also been a Tae Kwon-Do British black belt champion with Redditch Tigers, was able to celebrate in front of hundreds of fans having gone one better than a fortnight previous when she was edged out in the final of the English Schoolgirls Nationals after powering to victory in the semi-finals.

Adkins’ coach Walton, a former Redditch boxer, is delighted with Madison’s progress and her ambition is to one day represent her country at the Olympics.

Walton said: “Madison has been invited to train with the Great Britain Boxing squad in Sheffield and other locations throughout the country this coming 2019/20 season. She works incredibly hard with her training and running and is extremely determined to get better and better.”

Bodyshot Boxing, based above Omega Tiles & Bathrooms in Millsborough House, Ipsley Street, is keen to attract more sponsors to help its fighters. Email bodyshotboxing.redditch@gmail.com or call Carl Walton on 07817 545649.