"We didn't deserve anything" says Clarke after Stratford defeat 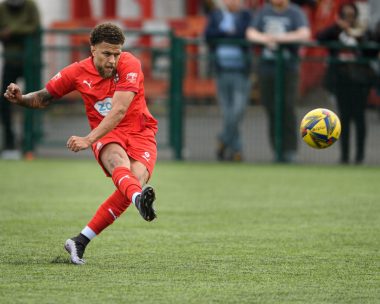 MANAGER Matt Clarke concedes his Redditch United side were undeserving of any points in Tuesday night’s 2-1 defeat at Stratford Town, after a late charge for an equaliser proved fruitless.

First-half strikes from Ahmed Obeng and Will Dawes gave the Bards the crucial advantage at the break, before that stronghold on the game came under threat following Asa Charlton’s header on the hour mark.

Despite looking a shell of their usual selves in the opening half, the Reds took great confidence from that goal to halve the deficit, but could not find the leveller despite goalkeeper Kieran Boucher heading wide from a last-ditch corner.

For Clarke, it was a frank conversation during the interval that helped United turn a corner and emerge a better side.

“I think in the first half we were awful, and were fortunate to go in 2-0 down – which was exactly the same way it went when we came here last season.

“We had words at half-time and the performance was better in the second half.

“When you’re 2-0 down at half-time, you have a choice – either to go out there and fight and show a bit of pride – or you get beat four or five nil.

“We made a couple of changes, and we were better out there with the introduction of the two substitutes, we competed better, there was more desire and fight and we pull it back to 2-1.

“We weren’t good enough and didn’t deserve to get anything from the game, even though we almost equalised with the last kick.

“I need to have a look at the personnel on Thursday in training, because we were a million miles off of it, especially after the three points on Saturday.”

That match in question saw the Reds overcome Hitchin Town by a 2-1 scoreline at the Trico Stadium to open their Southern League Premier Central campaign in positive fashion.

Dan Sweeney buried clinically to give Redditch a first-half lead, one which was wiped out by Luke Brown’s strike from the edge of the penalty area.

Responding positively to that setback, the hosts regained the lead to win the encounter, Sweeney again providing the magic moment with a drive that nestled in the top corner.

On Saturday, Redditch face a trip to Leiston – who drew 1-1 with Royston Town in midweek after a 4-0 rout of Bromsgrove Sporting on the opening weekend.

A DANNY Waldron double and a Charlie Dowd strike against his former employers helped Alvechurch pick up their first three points of the season following Tuesday night’s 3-0 win over Bromsgrove Sporting.

Responding well to a 1-0 opening-day loss at St Ives Town, the Church dominated throughout and were fulling deserving of their success at Lye Meadow.

Dowd netted the 24th-minute opener after Waldron’s initial effort was blocked, before the aforementioned former Leamington forward netted a second-half brace – a close-range header and a last-gasp penalty – to down the Rouslers.

Hednesford Town are the visitors for Saturday’s upcoming fixture.