THE WORLD of sport has been classed as ‘male-dominated’ for many years.

Women have waited for a long time to be noticed and supported to the same extent as male sports stars. Even the words for sports change for women – ‘women’s football’ and ‘ladies tennis’ imply it is not normal for women to be playing these sports.

Differences between men’s and women’s football have been particularly noticeable during the four-week lockdown.

Elite sports clubs and academies are still allowed to train and play during this lockdown imposed on England. However, most men’s academies are classed as elite, whilst most women’s are not.

One of the main reasons for this is that women’s teams usually receive less funding and resources and without this they are not eligible to be classed as elite.

So, even if the men’s teams are still playing, it is more likely the women’s teams cannot. The hashtag #IsItBecauseImAGirl has been used on social media to bring attention to the problem lockdown has caused women’s clubs.

The attitudes to women’s football did start to change during the 2019 FIFA Women’s World Cup, as more people than ever gathered to cheer on the England team against the mighty United States.

Interest in the sport rose mostly because there was a larger media coverage of this tournament than any other. Google search trends around the term ‘women’s football’ spiked during June 2019 – proving that, if given the media time, the public wants to watch and support women in sports.

Many female football stars are aiming to change the perception of what it is to be a woman in football. These women are now demanding attention, fighting for equal pay and picking up heaps of trophies as they go. These women are here to make the world of football for the next generations of female superstars better.

Megan was one of the most well-known footballers going into last year’s World Cup thanks to her fight to end the gender pay gap between the US men’s and women’s soccer teams.

She has also been highly successful in her football career – winning six international awards such as the 2019 Ballon d’or Féminin and the 2019 FIFA Women’s World Cup Golden Boot. 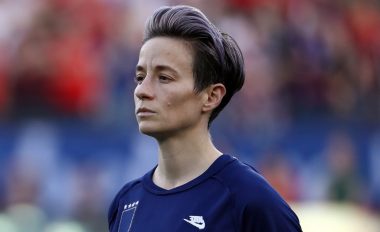 In 2019, she led her US team to win the 2019 World Cup, something the US men’s team has never done. Rapinoe is very influential with 2.2 million Instagram followers and there are a lot of people who listen to her.

She uses her platform to rally for causes she supports, such as LGBTQ+ rights, the Black Lives Matter movement and the aforementioned gender pay gap in the sporting world.

The former Arsenal and England player may have hung up her football boots in 2017, but since then she has been making waves on TV – coming fifth in Strictly Come Dancing in 2019 and making history as the first female pundit on Sky Sports Super Sunday.

She had previously had an illustrious football career, starting at Arsenal academy when she was eight. She went on to lift the FA Cup and League Cup with the team, securing a total of 21 major trophies during her adult career there.

Alex has faced some controversy. When it was rumoured she was going to be taking over from Sue Barker on the programme Question of Sport, she was subjected to racist abuse online, but she has learnt to ignore it – saying in an interview: “I have a whole audience that does love me”.

One of the standout stars of England’s 2019 World Cup campaign and thought to be one of the best England players at the moment, defender Lucy Bronze scored a quarter-final goal to get England through to the semi-final stage of the 2019 World Cup.

She has also been UEFA’s Player of the Year and nominated for a Ballon d’or. With her previous team Lyon, she won the French League and the Champions League.

Fighting to be accepted since she was a child, Lucy played in a boys’ team in until she as 12 when, under FA rules, girls and boys can no longer play together.

Her mother wanted her to give football up and take up athletics instead, but Lucy did not want to give up her dream. Her parents had to make the hour trip to her nearest girls club where she rose to be the player she is today.

Rose Lavelle was practically an unknown before the 2019 World Cup. She had got called up to the US Women’s team in 2015 but did not start for them until 2017.

She had many injuries which have also caused her career to stop and start many times, but last year she made a big contribution to her team’s campaign – scoring two goals against Thailand and scoring the ultimate winning and final goal of the tournament.

Rose stuck with football from the age of five because she found it fun. She got into the youth team, which led her to be a part of the US women’s winning team.

In the last year, the women’s football world has had its ups and downs and, even though the times ahead are still uncertain, there are many women in and outside of the beautiful game making sure it carries on.

After lockdown, they will be the first ones to put on their women’s trainers and get back into action in the post-lockdown world.

This article is written and researched on behalf of Zalando. Visit www.zalando.co.uk/sports-women-home.