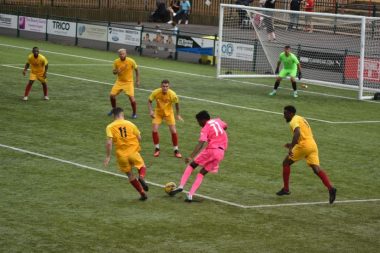 REDS skipper Tom Rankin believes his Redditch United side could be proud of their efforts, if not the scoreline, in Tuesday night’s 4-1 humbling by Gloucester City.

The Trico Stadium hosts were undone come the final whistle despite going into the half-time break with parity – courtesy of Dan Sweeney’s equaliser to cancel out Matt McClure’s opener – as three trialist goals proved the difference for the Tigers.

With three warm-up fixtures remaining before Matt Clarke’s side kick off the season, starting with Saturday’s stand-out trip to Merthyr Town, Rankin says United have no reason to feel hard done by their midweek showing.

“They’re obviously a very good side and it was a big test for us to see where we’re at currently,” said the 26-year-old.

“I thought apart from the first goal where we switched off, we did really well, especially in the first half and at the start of the second half.

“For 70 minutes, I thought we probably just edged it.

“In the end, there were a couple of silly goals from us to give away, but we’ll learn from that and improve as a team and take that into Saturday.”

Redditch will no doubt benefit from the lessons learned in their latest outing, while the announcement of Rahis Nabi’s signing before kick-off will certainly do spirits no harm as the build-up to the new campaign continues.

The midfielder did enough to impress Clarke during a successful trial period, notably scoring with a whipped free-kick effort during the Reds’ opening win of pre-season against Lye Town, and the Pakistan international admits he cannot wait to build on the progress made in the past few weeks.

“We have a great bunch of lads and the coaching staff is what I need to keep pushing and enjoy football again,” said the 22-year-old.

“[Whether it’s] training or playing in games, I’ve enjoyed every minute and I hope it can stay like that.

“[On pre-season] Every game is a big game and is a statement, and we want to keep pushing, keep playing the way we have and keep going.”

There was success for Redditch in last weekend’s 3-0 victory over Walsall Wood, thanks to a brace from Sweeney and one from Curtis Hutson, with the latter netting the pick of the bunch with a 30-yard rocket that zipped into net via the post.

FOR NEIGHBOURS Alvechurch, preparations for the visit of Leicester City’s under-23’s – starring former favourite Jake Wakeling – continued with a 1-1 draw at AFC Wulfrunians in midweek.

The Church took a lead on the half-hour mark at the Castlecroft Stadium through a Tom Turton penalty, only for the Midland League hosts to strike back six minutes later to restore parity.

That was the way it stayed at the final whistle, and helps Ian Long’s troops pick up from last weekend’s 2-0 defeat at Darlaston Town 1874 – where first-half strikes from Andy Nicol and Maxwell Ngbeken settled affairs at the Bentley Sports Pavilion.

There is news of a blow, however, that Alvechurch will be left to make do without star name Kevin Da Veiga Monteiro this term, following the midfielder’s departure for Walsall Wood after two seasons at Lye Meadow.