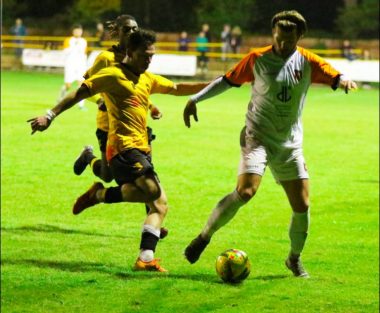 A FIRST-HALF goal fest at Lye Meadow fell the way of Stratford Town as Alvechurch’s search for a first win of the Southern League Premier Central season goes on.

Jake Wakeling’s 14th-minute penalty brought Church back on level terms after falling behind to a Leam Howards effort, though it was ultimately not enough with Will Grocott and an Ashley Sammons stunner tipping the contest in favour of visitors Town by a 3-1 scoreline.

A frantic opening meant the first goal was never likely to be far away, and so it proved as Howards snuck home the opener after a melee ensued inside the box following a blocked effort from Sammons.

Ian Long’s men were not discouraged by this however, and quickly hauled themselves back on level terms. 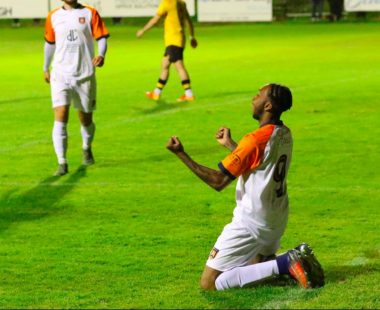 A penalty conceded by Jordan Williams after a foul on Wakeling afforded the young gun to thrash home his fourth goal of the campaign from 12 yards in the 14th minute.

Minutes later, a lengthy stoppage followed, which perhaps took some momentum out of the hosts, when an injury to Dave Bellis forced him off the pitch – Joe Daley the man to step in as his replacement.

And with play getting back underway, Stratford were soon back in front when another spot kick was awarded for a handball after a drive goalwards by Kynan Isaac.

Grocott made no mistake, and four minutes later neither did his teammate Sammons with a sumptuous strike from distance.

It was a goal worthy enough of making any highlight reel – the ball dropped kindly after a short Stratford corner was headed away, and the midfielder did the rest with a rasping hit that left Niall Maher with no chance on 25 minutes. 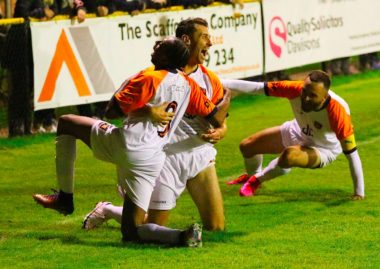 Ashley Sammons is mobbed by his teammates after his thumping strike. Picture: Stratford Town FC.

There was a strong shout for a Stratford penalty waved away just before the break, when Maher clattered the onrushing Howards as he edged towards goal – earning him a yellow card.

In contrast, the second half failed to live up to the enthralling nature of the first, with chances at much more of a premium.

Church did play some football that was easy on the eye, but too many times failed to make the most of their good play when reaching the final third. 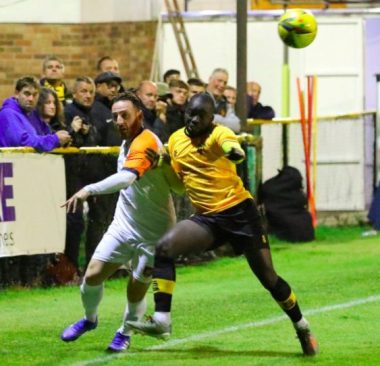 Stratford threatened to extend their lead further and could come no closer than a Howards drive which rattled the crossbar, while substitute Kyle Perry should have done better when blasting over from a good position.

The striker went closer still with a header from Joe Curtis’ centre that went narrowly miss, though the miss did not prove costly with Town comfortable winners.

Alvechurch find themselves bottom after three games played, but now hope to use their FA Cup second qualifying round tie at home to National League North side Kidderminster Harriers on Saturday (3pm) as the perfect tonic to kickstart their season.